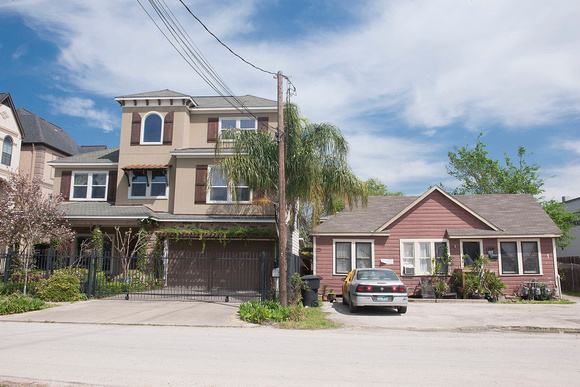 This work represents my on-going project on a rapidly changing neighborhood in Houston. Rice Military is located next to Camp Logan, which, in WWI, was a U.S Army training camp along with nearby Memorial Park. Rice Military was named after the Rice family, founder of Rice University, who owned the land there in the early 20th century. This area consisted of small bungalows, as opposed to Camp Logan, where villas were built and property prices were about double that of Rice Military. Around 2003 a development boom started to reform the neighborhood; the little bungalows that once provided housing for artists and Hispanic families, were torn down and 2-3 level town homes were built for the fortunate middle class young couples and families who could afford the sharply rising property values.


In my project I am trying to document this style of change, which is not a unique trend in Houston’s urban development.